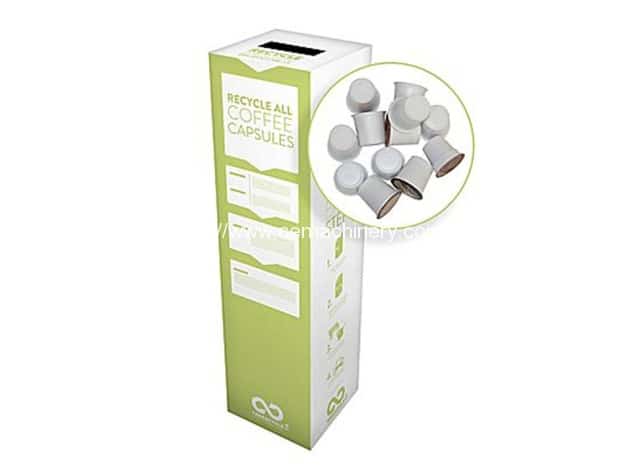 Next time you take a stroll down the coffee aisle at your local grocery store, make a note of how many “single-brew coffee” brands are now available. As a culture obsessed with coffee and convenience, it only makes sense that so many people jumped on this particular bandwagon, but convenience comes at a cost — for your wallet and the environment.

According to the Coffee Association of Canada‘s (CAC) annual Coffee Drinking Trends in Canada report, two-thirds of adult Canadians surveyed say they drink coffee every day, while 80% consume it on a weekly basis. The most dramatic change the study notes for 2013 is the increase in coffee drinkers who primarily use single-serve machines — devices like Tassimo, Nespresso and Keurig — which use pods, discs, cups or cartridges, 10 billion of which end up in landfills each year in Canada.

Spearheaded by the Canadian offices of TerraCycle, the U.S. company thinks they’ve found the solution.

TerraCycle’s Coffee Capsules Zero Waste Box is being touted as the first nation-wide recycling solution for this type of waste. TerraCycle brainstormed the idea to solve the issue of different waste streams — coffee pods can’t be recycled in municipal facilities because they combine too many different materials.

“The single-serve coffee capsule industry seemed to bubble up almost overnight and, at first, 100% of the packaging was going to landfills, or worse,” Albe Zakes, global vice president of communications for TerraCycle, said of device’s genesis in an email to the Post. “First, we sourced every type of capsule we could find: K-Cups, T-Discs, and aluminum pouches with plastic caps. Then, we took these packages apart and discovered that, once separated, the various components could indeed be recycled.”

Here’s how it works: You buy the box online for $52.96 from Staples or OfficeMax Grand & Toy, or call your local store to arrange an in-store pick up, then you fill it up with your used coffee pods and call UPS to pick it up when it’s full. From there, UPS brings the pods to TerraCycle’s warehouse, where they are weighed and aggregated. The capsules are then sorted and taken to TerraCycle’s processor in Fergus, Ont., where they are recycled to create plastic lumber and paving stones. Nearby farms use the residual coffee grounds as compost.

“It doesn’t make sense for a government to recycle something like this because it costs so much for them to collect and process this waste,” said Leslie Tan, director of business development and acting general manager for TerraCycle.

Sounds simple, but there’s a catch: TerraCycle is asking Canadians to pay the cost of recycling their waste. The total cost of the Zero Waste Box, which includes a pre-paid shipping label, is $52.96 plus tax — and that’s just for the small size (10 x 10 x 18 inches). The medium (11 x 11 x 40 inches) is $96.96, and the large size (15 x 15 x 40 inches) costs $136.96, and customers will have to pay to replace their Zero Waste box every time they send it away. The majority of the money will cover the cost of warehousing, sorting and recycling all of the capsules.

So will it work? Tan thinks so. “People who are willing to pay for these boxes are those who really care about the environment, or feel really guilty about generating all this waste just for the convenience they value in their lives,” she says.

Tan suggests that boxes are ideal for offices with single-brew coffee machines in the break room. For home — depending on how fast you go through coffee — she recommends having friends and neighbours bring their used pods to help build up the collection.

However, research suggests that connivence trumps environmental concerns for many coffee drinkers.

“If you think people are going to shun this thing (single-brew coffee) because of concerns for the Earth, give your head a shake,” Daniel said in an interview on the CAC website. “Single serve is here to stay.”

OfficeMax Grand & Toy launched the boxes online on Aug. 20 as a trial run in southern Ontario only. Tan estimates that fewer than 100 were sold. The program expanded nationally on Sept. 30 when Staples began selling them on its website.

So what do you think: Would you pay to help reduce the environmental impact of single-serve coffee machines?