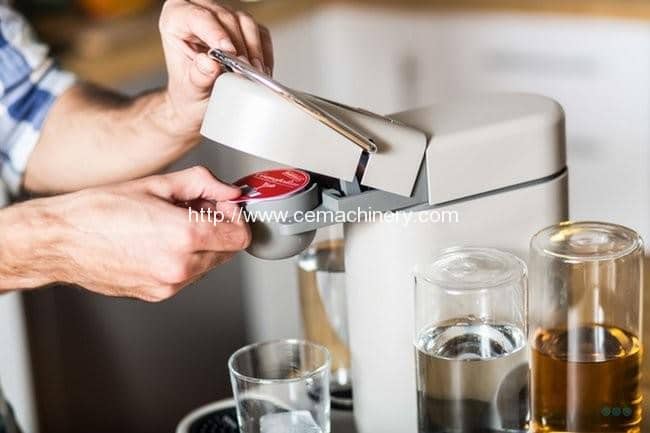 Yet another robotic bartending appliance has hit the crowdfunded scene, because apparently the only cocktails anybody knows about anymore are alcohol and fruit juice.
With just over two days to go in their campaign, Bartesian has already surpassed their fundraising goal by a comfortable margin.

This suggests that people are either increasingly unaware of the true craft of mixology and what it takes to be a good bartender, or we’re lazy and all we want is a new shiny thing for the kitchen bench.
Billed as “The Ultimate Home Cocktail Machine”, Bartesian takes on the capsule idea of Keurig coffee machines and the K-cups that caffeine-lovers have hacked to fill with their favourite blends of coffee and tea for perfect, automated home brewing.

The capsule idea seems misguided here, considering Bartesian takes a plastic cup filled with fruit juice and squirts it in a glass with alcohol that you provide. Apparently, more than 300 backers on Kickstarter forgot that the point of the K-cup was to take a dry ingredient like coffee grounds and tea leaves and brew a drink.

Applying the capsule concept to single serving fruit juice pods is misleading, and apparently very effective. Bartesian suggests that they’ve included liquid ingredients as a premium product choice (non-alcoholic liqueurs, juice concentrates and bitters), but the truth is that while it would be strange to include powdered mixers, coffee grounds are technically a dry ingredient.
See? Makes sense for dried, brewable ingredients. It would seem more sensible to bottle and sell Bartesian fruit juice blends than call this device a cocktail machine.

Bartesian will launch with six cocktails: a Margarita, Sex on the Beach, Cosmopolitan, Bartesian Breeze, Uptown Rocks and a Zest Martini. Kickstarter backers will contribute to the selection process for future drink pods, including suggestions like a Tequila Sunrise and a White Russian (neither of which can be made properly using this machine).

A pledge of US $299 (about AU $403) scores you a Bartesian of your own including 12 starter capsules. For every extra US $20 (AU $27) in your pledge, you’ll get another set of 12 capsules for home cocktail convenience.

The projected schedule for Bartesian slots shipping to backers beginning eight months after the campaign, which assumes the tight and detailed production schedule goes exactly according to plan.

Now that the project has been successfully funded, Bartesian is expected to sell for about US $400 (about AU $539) once the campaign ends.

Chloe is a writer from New York with a passion for technology, travel and playing devil’s advocate. She recently relocated to Sydney from Ibiza, which obviously means she works way too hard.

0shares
coffee machine
Thanks for Sharing Share:
PREV： Advanced Technology for the Packaging of Coffee
NEXT： Ed Cowan tests investment skills in his Tripod Coffee business