I happen to be a coffee aficionado (or snob, depending on your view)
and have made espresso myself with my reliable old Sunbeam for quite
some years. I’ve had this espresso machine just over 10 years, had
others before it and used a variety of other methods over the decades
too. Personally I’ve settled on espresso as being the best for speed and
quality.

Ages ago Pod machines started to appear and I laughed at them.You
couldn’t see what your coffee was like, you couldn’t smell the ground
beans and you didn’t know how well packed it was (or should I say “tamped“).
You had no way to guage if it was going to be good quality coffee or
poor quality coffee for the major inputs (sight and smell) were removed.
But it was sexy looking packaging

Initially I felt that they were for those who were:

Recently Pods have become much cheaper with Aldi selling them now for $6
for a pack of pods being about the cheapest I’ve seen yet.

Now personally I think pods are acceptable in an office environment when
no one will own up to cleaning or maintaining the machine as well as
for people who are occasional coffee drinkers (read, don’t drink coffee much but offer it to guests),
but for anyone who likes their coffee and has any sort of capacity to
do anything themselves they just don’t make sense. I don’t mind the
whole scene, as its got its purpose.

However I too freqently have people telling me (or hear them telling
others) how good pod coffee is and how they can’t tell it from the
coffee they get in a Coffee Shop. Well don’t say that in hearing range
of the barista is all I can say. To me such admissions are tantamount to
saying

again, either is fine by me. So for those who have never had a coffee
machine (only a pod one) I thought I’d show you some differences.

The first thing you notice (well if you’re used to handling coffee) is
that with the pods you don’t get to smell the coffee, because its sealed
inside a pod. Below is a picture of a typical pod beside a relatively
standard sized coffee basket (the bit in the handle which holds the
coffee) 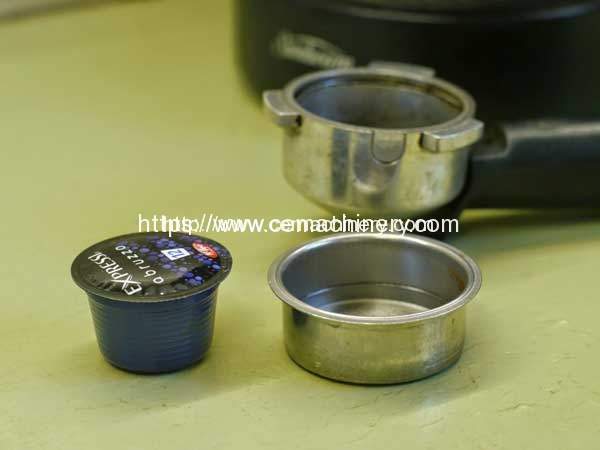 I think its pretty clear that the pod is much smaller than the basket is … but its not just about that point either (although size does matter).

An important step in making a good coffee is the right level of “tamp”
on the coffee so that it provides the right level of resistance to the
water and facilitating the extraction of the coffee in fractions (IE
different parts come out at different times). When you cut the plastic
cap off the tightly sealed pod you notice two things:

As you can see there is room for more in there and if I tamped it down
(which is not possible) it would  perhaps cause a problem for the coffee
maker. At least the grind seemed appropriate. However with that poor a
tamp its unlikely you’ll get a good crema (and gosh lookie there you don’t).

To see how different the amounts of coffee are lets tip it onto a plate.

basically its about double (well as the size of containers would suggest).

According to the back of the box the pod will give:

For those who have never actually measured it, a typical demitasse (like
you’d get at a coffee shop) is about 60 ~ 90ml. Mine comfortably holds
60ml, but I normally only put 40ml into it.

This means that given the volumes of grounds I’m drinking a ristretto and I you actually put only 25ml from your pod into a demitasse I’m sure you’d think I was ripping you off.

On that subject lets look at costs: the pods cost about $6 and you get
16 capsules and a total of 128g of coffee. Sure for the maths challenged
that’s only 37c a cup, but looking at it another way that’s $46/Kg for
coffee. Others are as high as $98/Kg. I buy my coffee at one of the good
roasters of coffee in my area (read its an up-market place with high prices and my friends will say that its expensive), and my coffee (ground for me by them) costs $22/Kg. So basically the pod costs from a bit more than double what I pay for coffee to nearly 5 times more.

Of course its clear that I use more coffee (you could always use a smaller basket, but shit, why waste your life on weak coffee?), nearly double what’s in a pod, so the economics could also be viewed that I pay the same (than the cheapest pods) or less than half for the others – but for a better coffee.

So to me it seems that if your argument is pods are for convenience …
well I guess … but so too is drip filter coffee, and you get to smell
the coffee too. If you consider you are getting poor quality for twice
the price then I really don’t see why you’d do it.

If after this you still argue that the pods are as good as the coffee
shop, then either change coffee shop or admit that you really are devoid
of the capacity to taste or smell and you should stick to tea bags or
instant coffee.

I expect that many from the Kingdom of Wang will just poo hoo this post and say how good their pods are. I mean after all, the Emperors clothes really are fine.